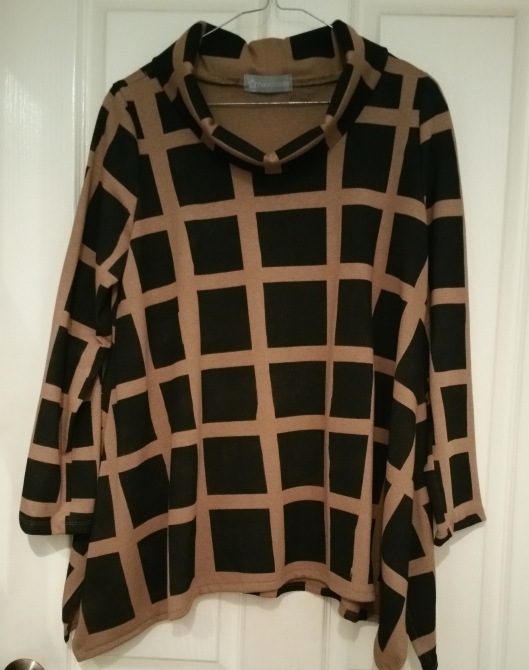 I picked up three cut length of linen jersey at a European fabric market some years ago and now all of them have been printed and sewn up into tops. So there, take that, stash!

While I was very happy with the first two tops which were done with my usual technique of block printing with a rubber stamp, I was itching to try somethin new. To be specific, I very much liked this Marimekko print and thought I could create something like it by taping off a crisscross pattern with masking tape and inking the fabric left exposed.

Of course the fabric I had on hand was brown, so it wouldn’t look the same, but brown was just the right colour for autumn which is around the corner. I rather like a combination of black and brown and thought I would look pretty good. So after cutting out the pieces for the top, — details about the pattern here –, I tried what I had in mind on a leftover scrap. 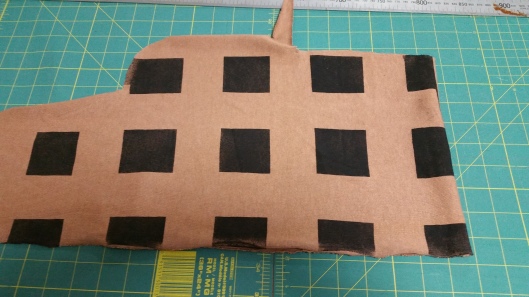 Too much brown, I thought, the taped off sections were too wide. So I tried to cut the masking tape in half lengthways, which was a job and a half because if it doesn’t stick to the scissors it will stick to itself. Half way through the job I gave up and finished with narrower sticky tape, taping off a sort of windowpane pattern. Instead of using a stamp to transfer the fabric paint I inked the squares of fabric left exposed directly with a foam roller.

It was much harder going than I expected, because the jersey was quite thick and getting the squares to be a nice opaque black wasn’t easy. I had to go over each square several times, working the paint into the fabric. It took a lot of fabric paint, making me appreciate how economical block printing is. Using a screen or an airbrush may have been more effective, but some of the attraction of the masking tape technique was that it looked quick and simple. I certainly wasn’t going for having to tackle a whole new technique!

But I persevered and this is what the front looked like when the inking was all done and before the sticky tape was removed.

It took me a whole week to be brave enough to pull of the tape, because I was nervous that some of the paint could have leaked under the tape, which would have ruined the look. But surprise, the lines were clean, and I rather like the way this top has turned out, even though it is quite different from the Marimekko. The pattern is much more regular, the small irregularities I thought I added don’t have much of an impact, making it look more tame and conventional. But on the whole it’s not too bad. It won’t be a favourite, and I now regret not using one of the other patterns I contemplated, but if I had, I would probably regret not trying the Marimekko knock-off. You can’t win, and the fact that decisions are irreversible in this business is part of the thrill. Live a little dangerously, I say, and besides, there is always more fabric! 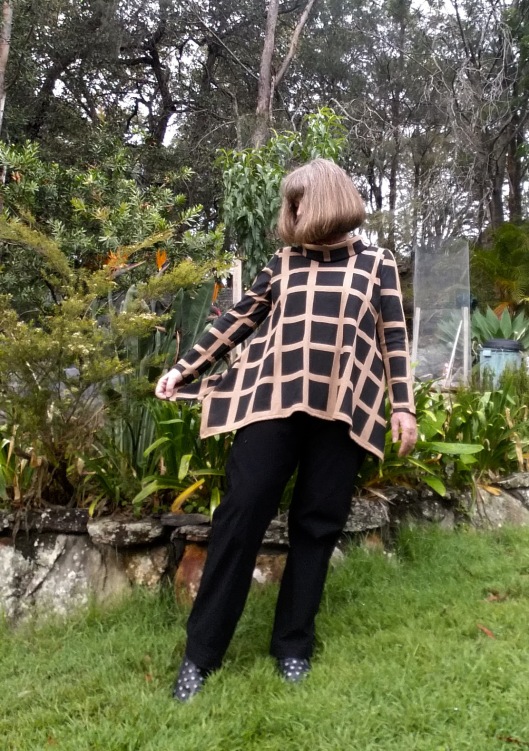 I might still have a go at a black and white version the Marimekko, seeing I have learnt a couple of things with this project and always dislike the thought that knowledge, once acquired, won’t be put to good use.

First of all it is hard to do the irregular pattern with straight lengths of tape. You need to cut the masking tape into squares, which are much easier to place wonkily, and ink the lines between them, not the other way around. The fabric needs to be thin, silk would be best but it is expensive for an experiment, and it is also not very white. I think it is important for the white to be very bright and the black very solidly black for this design to work. A thin cotton would probably be ok, thin enough to ink easily. As it happens I have 10m (!) of cotton used for batik, but unprocessed and still very white, in my stash. Hmm, that would be just the right weight… and I do have an airbrush tucked away I haven’t used yet…

It may take me a while, but watch this space!