This tee is a departure from the usual in a couple of ways. First I used a different pattern, the Love Notions Laundry Day Tee, which has a different shape to the classical tee pattern I normally use, the Burda Lydia, a very old pattern that now seems to have disappeared from both the German and English-speaking websites. Probably time to move on, and I rather like the more defined waist and swing hem of the Laundry Day Tee.

The LDT has a lot of variations, and the details of which version I picked and how I modified it are on PatternReview.

The more exciting innovation is that I tried a new block printing technique after coming across ApartmentTherapies ‘How to block print the easy way’. What a great idea!. Instead of carving the block out of Easycarve (a medium similar to the white erasers used to erase pencil), you cut your shape from an adhesive-backed foam sheet. You can use a craft knife like she did, but for simple shapes it is even faster to use a pair of scissors to cut around the outline, stick it to a backing — and done! Below is an example I found to illustrate what I mean.

Wow, that idea was a lightbulb! In my case I started with a leaf outline and perspex as a backing. You can cut a simple shape in a jiffy because instead of digging away all the superfluous medium with your carving implement you simply cut around the outline with scissors. So much easier! And printing is fast too.

The perspex is great as a backing because you can see where you place your motif on the fabric. I beg my perspex pieces from a a friendly business acquaintance who is left with small scrap pieces in the course of his work, which I am only too happy to take off his hands. Nothing like a win-win!

The second improvement was that I finally started to use a brayer, as recommended in the ApartmentTherapy blog. This is a hard rubber roller like this: 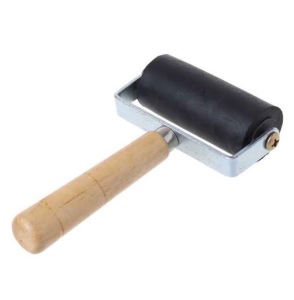 Previously I used a foam roller, which deposits less ink on the block, but has the advantage of not clogging up intricate lines. Horses for courses. If there are no intricate lines a brayer works much better, because the ink sits on the surface of the rubber and after rolling the ink on the block there is a thicker layer and therefore a better print.

After my first try with the leaves I made one discovery, however: it is quite difficult to get the ink evenly on every bit of your printing block, but nothing on the backing. You have to be so careful, and sooner or later there will be an oopsie or two which will spoil things. Darn! There are a few right on the front of this shirt.

Using the foam shape without a backing is not really an option, it is too soft, and neither is cutting the perspex around the outside of the shape, it is too hard. So finally I decided that instead of cutting one shape of the foam, I would cut three and stick one on top of the other. That makes it easier for inking and doesn’t take too much work cutting out. The lower layers don’t have to be too precise, just enough to lift the top layer higher off the backing.

I was also very careful to wipe any extra ink off the backing with a cloth before printing each motif.

So here is the result, my froggy shirt. Ribbip!